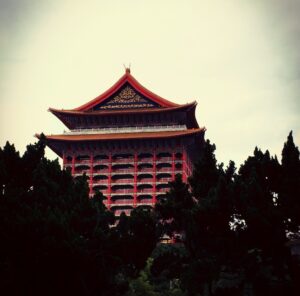 I was named by a fortune teller.

As a girl born into a traditional, conservative Taiwanese family, my grandparents deemed me too insignificant to give me a name. I was simply referred to as mei-mei (‘little girl’) for several weeks after coming into existence. So my mother, wanting the best for her only daughter, tracked down a renowned oracle to pick an especially auspicious name for me.

She found him in an area of Taipei bustling with palm readers, clairvoyants, and Feng Shui masters. After giving him the time, date, and place of my birth, she waited patiently as he looked at my fortunes to calculate a suitable name—something that would compensate for the elements lacking in my birth chart and tip fate in my favour. The diviner pondered over numerology, astrology, and various other factors then wrote down two Chinese characters along with the occupation I was destined to have. He gave the piece of paper to my mum and sent her on her way.

Years later, I was told by another soothsayer that these two characters, 筱雯 (pronounced Hsiao-Wen, meaning ‘small, colourful cloud’), must have been carefully selected for the water element they represent to counterbalance the immense fire within me.

At age ten, when my family moved to Australia, I was told to choose an English name in order to assimilate. Thereafter, I was known as Annie Wang.

I was a bit of a nerd in school, one of those kids who joined book clubs and wrote to pen pals in Japan. My love for reading began early in childhood, and I would secretly stay up for hours after bedtime to read my favourite authors’ latest titles. I grew up as an ordinary middle-class Asian immigrant in the West, and even though I loved art and writing, I never considered becoming an artist or an author because I had my path laid out with a ‘real, proper job’.

My mother believed that there were three professionals that every person needed in his or her life: a doctor, a lawyer, and a bloody good accountant. Since my older brother was already on his way to becoming a doctor, and my younger brother had decided he wanted to practise law, I was naturally going to assume the third role. Besides, my mum reasoned that accounting was a suitable job for a girl, one that wouldn’t be too taxing on her later responsibilities as a wife and a mother.

I, of course, decided I was going to study Mechanical Engineering instead—because it was exactly what my mother said a girl shouldn’t do, because I had some interest in Mathematics and Physics, and because at the age of seventeen I had no idea what I wanted to do for the rest of my life. I worked in mining for several years after graduation, and that was when I realised something was grossly lacking in my life. I was depressed. I hated my job. My body was in constant pain and I had a whole host of psychosomatic health issues. I saw no future in being who I was.

This quarter-life crisis forced me to do some soul-searching. I joined meditation classes. I started painting and writing again. I took up sculpture lessons. I practised yoga and became a Reiki Master. I studied Holistic Counselling, tried art therapy, sound healing, and some other modalities that involved a lot of wailing and spasmodic movements of the body. I came out the other side with a newfound identity, a reinstatement of my birth name, and a determination to return to my childhood passion.

Some years later, after finishing art school and showing some promise in my painting career, my mum found a piece of paper stashed in an old drawer—the one that the fortune teller had given her all those decades ago. She opened the folded sheet and there, next to my name, it read: artist.

It did not take me long to start exhibiting as a painter, but it took me thirteen years to finish my first novel. And when it came to choosing my pen name, I used both the English and the Chinese parts—because, really, they are two halves of a whole. That first novel, The Imperial Alchemist, represented everything that my journey had been up to that point, so it is a good place to get to know me before we continue this quest together.

Lovely visit at the oldest Confucius temple in Tai

Wonderful day at the @chimeimuseum getting a dose

Check out the link in my bio for this month's book